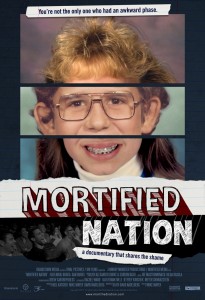 Part documentary, part concert film, Mortified Nation captures adults sharing their most embarrassing childhood writings on stage and chronicles how the simple act of exposing one’s private past can inspire an entire nation to “share the shame.” Released in 2013, the film transports viewers back to a time of awkward firsts– first love, first rejection, first total freak out. Mortified Nation captures the adolescent experience in a way few of us truly remember and most of us tried to forget. Directed by Mike Mayer.

Praise for the Film

“Comedy gold… funny, touching, and intensely relatable… (a) celebration of the maelstrom of emotions, careful posturing, and naked vulnerability that make up adolescence.” Wired

“Everyone who had a childhood needs to see Mortified Nation.” Huffington Post

“Why would anyone ever volunteer to do something so humiliating? As it turns out, there are lots of answers.” Time

“Hilarious… no matter how weird you feel about your diary now, do not ever discard it! You don’t have to share it with anyone, but as Mortified Nation shows, sometimes, re-reading it as an adult is like giving your teen self a big old hug.” Rookie Magazine

“You’ll want to dig up your own childhood diaries and start sharing the shame, too. You’ll laugh, you’ll cry, you’ll squeeze your bumhole tight in mortification.” Em & Lo

“Mortified Nation is Hands on a Hard Body for a new generation that refuses to take its hands off of the pages of its past.” Heeb Magazine

“Watch the new documentary, you’ll probably find yourself rooting around in your closet trying to find your old journals.” The Hairpin

“Watching this doc made me happy I didn’t throw away my middle school journals when I moved… This film makes shame look cool.” Duluth News Tribune